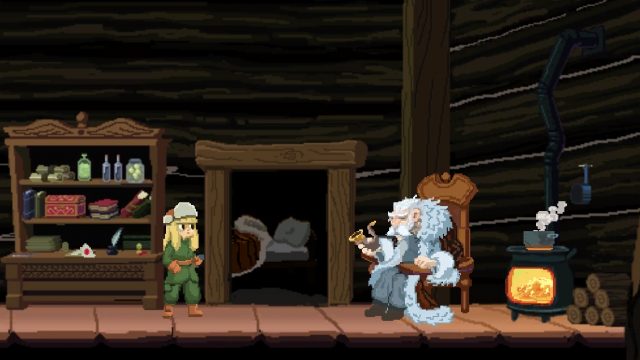 Download the early alpha version and donate to bring Katyusha to life!

Loresoft is proud to announce that the free demo of Katyusha is now available on Steam!

This is the first official post of our work so far.

Key features of our game:
– Freedom in gameplay: Play either full action or going stealth by hiding from your enemies. Stealth attacks allow you to hit with critical damage once the stealth bar overpasses 50%.
– A.I.: Enemies have an improved A.I. Wild animals, which will occur only during the first level of the game, need you to stand still and hit them, while enemy soldiers require that you either time your shots or hit and run when using melee.
– Historical facts: Meet real-life people from World War II and learn historical facts that occured in the Soviet Union. They will train you and they will show you how to survive in battle.
– Checkpoints: Find real-life World War II letters from both Russian and German soldiers. Use them wisely in checkpoints in order to save your progress.
– Levelling system: Katyusha levels up and spends attribute points in Strength, Dexterity, Vitality and Intelligence. Strength increases her melee attacks. Dexterity increases ranged attacks. Vitality increases the health bar and finally Intelligence gives boost to the eagle (mentioned below).
– Emotional: Communicate with NPCs and live emotional moments, while also discovering easter eggs as well.
– Eagle: Use your pet to attack enemies. It levels up as well, while at the same time it has a cooldown for every usage.
– Crafting: You can use cotton, leather, iron and other materials that you encounter in order to craft armor and items that will assist you in battle.
– Boss fights: Encounter bosses from World War II and face them into immersive battles (not available in early alpha).
– Trading: Loot enemy corpses and trade the items in NPCs (not available in early alpha).

About this demo:
You will play the first level of Katyusha, which is going to differ in the final version of the game. The enemy soldiers will not be included in that level, as they are placed for demo purposes. You will be able to test all basic gameplay mechanics, including our stealth system, the A.I., the first crafting material (cotton to bandage) and the first puzzle (a mine, placed outside the second house). Also, the levelling system is live for Katyusha, while the eagle will also have one later on. In this early alpha bersion there are no historical persons and facts mentioned. Also, the trading system is not available at the moment. Most likely we are going to add a vendor at the end of the first level, just for trade and a crafting station.

Known issues:
– The bear has several A.I. issues which are going to be solved, including invulnerability to bullets.
– Some enemy soldiers do not receive the bullet at the right moment when they turn their back on you.
– Rare animation bugs when dying while moving, in 95% of cases you will be fine.
– Several A.I. tweaking needed on the soldiers when you hit them from very large distance and when they are attacked by the eagle.
– Eagle animations when Katyusha is moving are not finalized.
– “X” key gives xp, which means that you can level up if you have a hard time (only available for the first build).

As we are in lack of resources, if you really like our project please support it! You can donate any amount that you wish from Loresoft.gr, on the right of our main page. We need a 5.000€ amount to market our Kickstarter campaign. If you can’t afford to help, at least spread the word in your websites, Facebook pages, groups and Forums that you know, so that we can have more people play the demo. This will surely help us in our discussions with publishers. There hasn’t been a video game for Katyusha so far, so let’s all give our best to bring her to life.

Katyusha is being developed for PC. More platforms will be announced in the future.