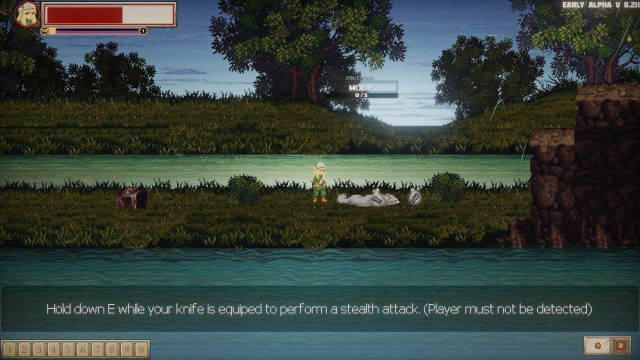 We have just updated Katyusha to v2.017 which includes the random loot system. Here are the patch notes:
– Random loot: You can now kill enemy soldiers and wolves for random loot. You can collect those items by pressing the Action button (E).
– Placeholders: You can collect 5 items in crates at the beginning of the level, using the action button. Those are just placeholders at the moment and will be removed in a future patch.
– Materials that you get from loot are used as armor, weapons and crafting materials. For example snake skin is used to make skin boots. Currently beside cotton used as crafting material for first aid, there is no active crafting for the armor and weapon materials. We are thinking of adding them either for direct crafting through inventory, or using crafting stations. This is under consideration/discussion with the community.
– Dynamic weather changes.
– Several improvements in A.I.: Increased visual detection and attack speed in some enemies (bear 1 at/sec and soldier 0.5 at/sec)

In the next December update we will add:
– Expansion of the first level so that it has a form which will be close to the one of the final version.

In future updates we will add:
– 2 levels (the final version of demo will have 2 levels).
– Plenty of items to find in random loot, such as armor, weapons and mods.
– NPCs and quests. Grandfather in the first level and various NPCs in the 2nd level will give you optional quests. Katyusha can either complete levels straightforward with only her quest to find her boyfriend or also do secondary quests.