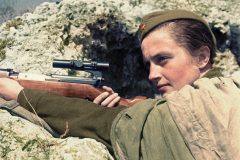 Featured in Level 2 of the Steam demo.

We confirm that historical sniper Lyudmila Pavlichenko will be featured in Chapter 2 of Katyusha (Battle of Odessa), which will be included in our free demo.

Pavlichenko was among the first round of volunteers at the Odessa recruiting office, where she requested to join the infantry. The registrar pushed Pavlichenko to be a nurse but she refused. After seeing that she had completed multiple training courses, they finally let her in the army as a sniper. At the end of World War II Ludmila had 309 confirmed kills and is considered the greatest female sniper of all time.