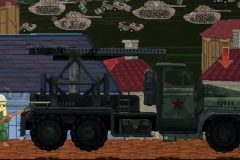 Loresoft is proud to announce that Katyusha has reached an alpha stage!

On December 1st we will release our updated demo on Steam with the alpha version, including the first two chapters. The 2nd Chapter will be the Siege of Odessa. Watch our 2nd alpha gameplay trailer below:

– First interactions with Lyudmila Pavlichenko as NPC (still this is work under progress as Lyudmila will fight alongside you).
– Limited ammo: From now on, bullets are limited, so you will have to loot them from enemies and use them wisely. Sometimes you will have to use melee attacks as well, in case that you are out of bullets.
– Day & Night cycle.
– Katyusha Rocket Launcher: When you find the Rocket Launcher in level 2, you will have to make it work.
– Resources: Katyusha Rocket Launcher needs gas and rockets in order to be operative in battle. When your resources are deplemented you will need to find new in battle.
– Aircraft bombardments: The SS forces will attack you with airplane bombers which will kill Katyusha instantly or create holes on the ground, an element that will change the environment.
– Hanged people: In World War II, nazi forces were hanging people. In Katyusha you will sometimes encounter hanged people. There is a small chance that they will drop a Russian letter, which you can use to save in checkpoints.
– We have also worked on the A.I. to be more realistic. So you will not face any more unrealistic behavior from enemy soldiers or speed issues (as they had some combat advantages in the old Steam demo).

So after 2 years of waiting, our demo on Steam will be updated, this time with the alpha version and the first two levels! Keep in mind that the gameplay elements are not final and that the second level will be filled with new content through constant updates. We will keep you updated for everything.

In the meantime, we are working on implementing a Vbulletin Forum in Loresoft.gr, so stay tuned for this as well!