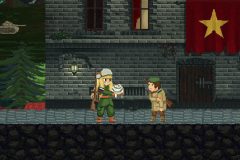 Watch chapters 1-2 and have a look on what we need.

Today we are glad to announce our new full gameplay video of Katyusha, which is a playthrough of the Steam demo (v.0264).

The new gameplay video includes:
– No death walkthrough by our game designer Manos Gryparis. How to reach level 9 and complete Chapters 1-2.
– Interaction with Lyudmila Pavlichenko and completion of the first quest. Note: Each time that you will speak with NPCs like Lyudmila, a random tip or story will appear. Try to enter and quit the Barracks (check video at 14:30). You can do this multiple times. There are 15 different tips/stories. Keep in mind that stories have to do with real fact from NPCs’ lifes.
– Completion of the updated dungeons which have high difficulty.

Funding of the project – What’s next:
Until now, we weren’t able to find an investor or publisher for Katyusha. Creating a campaign in Kickstarter or Indiegogo won’t help us reach our goal of 250.000€ (even with the minimum stretch goals) because the period of 60 days is very small for a game with no publicity. We have few support from Russian websites and a few influencers and that’s it. The only way to help us it to:
– Add the game to your Steam wishlist and download it.
– Share the game to Forums, Facebook groups and Steam groups (especially to anyone who speaks Russian or is an old-school gamer or supports indie games).
– Send the game to influencers to play it (again especially to those that apply to these 3 target groups).

After the war in Ukraine started, our negotiations with some US publishers were halted, as many of them stopped selling games in Russia. This brings us in talks only with EU and Asia as it seems. Our main target group is gamers from Russia and Former Soviet Union countries, due to the World War II theme. This is non-negotiable for us. We are in talks with several publishers  and investors until now, but no agreement has been reached. Whoever is interested can send us an email to info@loresoft.gr .

Open positions
Loresoft is looking for a lead developer and a music composer. We are looking for people who really care about the game and want to help us complete it. The only way to complete Katyusha is either if a funding is successful or if we find a lead developer who really believes in this project. All of our developers receive a very big percentage of sales, even if no funding agreement is reached. Again, for more info please send your emails to info@loresoft.gr .

Finally, we are sending our condolences to all those who have lost their relatives in the ongoing Russo-Ukrainian War and we wish that an agreement will be reached and the war will stop, so that no more lives will be lost. Have a look in the video that we created with Katyusha and Lyudmila Pavlichenko. The famous sniper has Ukraine origin, as she was born in Bila Tserkva.

Once again thank you for your support and your kind comments.
Regards,
Loresoft.